Hello readers, this is Murdock writing from Jeff's desktop. 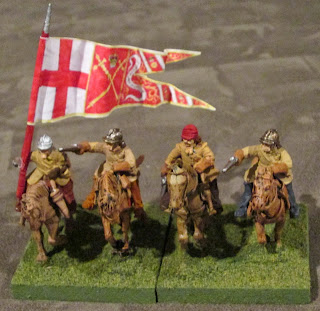 The Royalist commander has encountered more than the usual Gout and had complications from the treatments of the past few years.

This has Jeff currently in hospital awaiting hospice availability.

While winded from this event, Jeff is still carrying on his jovial talks.

Jeff wanted there to be a note to the readers and to assure you all that we plan to continue the games projects.
Posted by Bluebear Jeff at 1:39 PM 3 comments:

First of all, I should have cancelled Sunday's game . . . I had a pinched nerve in my neck and was in too much pain to concentrate and play.


Fortunately David, Rob and Alex were understanding and put up with my many mind fumbles due to pain.  (Please note that physically I am feeling much better today -- and also that clicking on photos results in a larger image).

It was my task to handle the "cavalry" end of our 1644 Battle of Montgomery.  And, never having played "Pike and Shotte" I wasn't sure just what to expect.


Well, my very first "Charge" order die roll was . . . boxcars!  A BLUNDER! . . . well as it turned out, I moved straight right and the charge was nullified.


Okay, well if I were to get a bit lucky, Trevor's two squadrons might just reach a Parliamentary unit.  So I rolled . . . snake eyes . . . yes the charge went it . . . and even though I had more dice charging a smaller opponent just standing to receive the charge, I rolled poorly and Alex didn't. So I needed to "test" . . . so I rolled . . . snake eyes again  . . .  my charging unit destroyed and gone!

Yes, my first three 2d6 rolls for the game were . . . 12, 2, 2 . . . about as extreme as possible.  And therein lies the story of the night for our cavalry.  Not that there were any more horrible die rolls, BUT that all of our charges and fall-backs emphasized the "volatility" of cavalry actions.


Because of my physical pain, I don't recall details but I think that the overall feel of this volatility seems reasonable . . . there certainly seemed to be a lot of "ups" and "downs" for both Alex and I as the lead changed back and forth.

As for the foot action to my left, you will have to take a look at David's blog since all I did was click a few photos when so urged.  I believe that they experienced some questions and difficulties on their end of the fight.


I think that the action moved fairly smoothly throughout the night.  Our major question on the cavalry end was when would Alex's flank march arrive.  He missed the die roll he needed for a long long time (I think it arrived about turn 7 or 8) by which time I was better prepared for it.


Eventually I defeated all six of Alex's squadrons while losing four of my six . . . but because of the Parliamentary successes on the field's west end, Montgomery 2016 ended in a success just like the Montomery, 1644/

Last Sunday Rob and Murdock came over and we played the Battle of Montgomery using the "Warr Without an Enemie" rules by the Wyre Forest Wargamers.


With my "chemobrain" memory problems, I won't try to recount the game.  Murdock has already done a bit of that . . . from the Parliamentarian perspective, of course . . . on his "Murdock's Marauders" blog . . . and he takes lots of photos (click on them for larger views).

The scenario we played can be found here -- but is now different than what we played because Rob did some more research and discovered that the flank march came from the east and not the west end of the field (as we played it) . . . so we plan to re-fight Montgomery using the correct flanking.

Without trying to tell a story, here are a few of my photos that weren't too blurry.

Hopefully my health will permit us to replay Montgomery this coming Sunday . . . with perhaps a Royalist victory this time . . . or perhaps not.